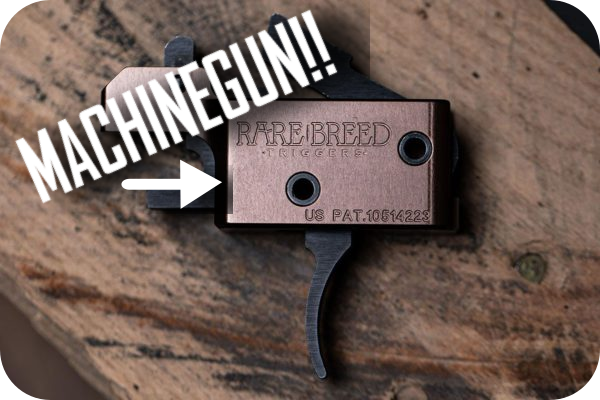 The ATF recently sent out a letter to all FFL’s(text of it is all below) saying about forced reset triggers (FRTs) “some of them are firearms and machineguns as defined by the National Firearms Act (NFA).”  Nevermind that according to the laws set by Congress, they are absolutely not.  In fact, in the letter the ATF contradicts themselves.  They state the definition of a machinegun, as defined by US law is Any weapon which shoots, is designed to shoot, or can be readily restored to shoot, automatically more than one shot, without manual reloading, by a single function of the trigger.  They then state their reasoning for calling FRTs machineguns is they do not require shooters to pull and then subsequently release the trigger to fire a second shot(this is false).  Notice they change the wording ‘function of the trigger’ to ‘pull and release.’  These are not the same thing.

The ATF has long said that a function of the trigger is from the rest position to the rear position.  Then from the rearward position to the forward position is another function.  This is their reasoning for allowing binary triggers, which shoot one shot with a pull of the trigger and one shot with a release.   Keep in mind those are still completely legal, so they’re admitting that definition hasn’t changed.

Lawrence DeMonico, the owner of Rare Breed Firearms and Rare Breed Triggers does a fantastic job of explaining everything that is going on.   He posted it on their facebook, and Reno May posted it on his Youtube, which is embedded below.

under 18 U.S.C. §§ 922(o) and 922(a)(4). They are also subject to registration, transfer, taxation,
and possession restrictions under the NFA. See 26 U.S.C. §§ 5841, 5861; 27 CFR 479.101.
Under 26 U.S.C. § 5871, any person who violates or fails to comply with the provisions of the
NFA may be fined up to $10,000 per violation and is subject to imprisonment for a term of up to
ten years. Further, pursuant to 26 U.S.C. § 5872, any machinegun possessed or transferred in
violation of the NFA is subject to seizure and forfeiture. Under 18 U.S.C. § 924(a)(2), any
person who violates § 922(o) may be sent to prison for up to 10 years and fined up to $250,000
per person or $500,000 per organization.
Based on ATF’s determination that the FRTs that function as described above are
“machineguns” under the NFA and GCA, ATF intends to take appropriate remedial action with
respect to sellers and possessors of these devices. Current possessors of these devices are
encouraged to contact ATF for further guidance on how they may divest possession. If you are
uncertain whether the device you possess is a machinegun as defined by the GCA and NFA,
please contact your local ATF Field Office. You may consult the local ATF Office’s webpage
for office contact information.